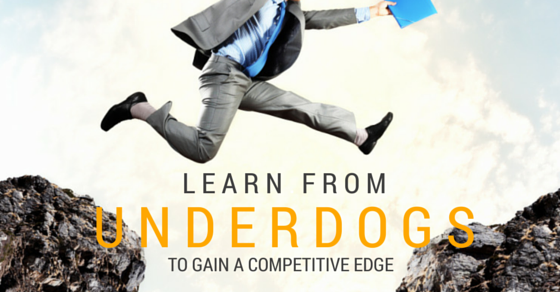 Learn from Underdogs to Develop a Competitive Edge

I’ve been in the technical recruitment business for the past 25 years, and have experienced a variety of management styles. The one with the most impact was the management philosophy of a prior employer: be nimble, thrifty and competitive. Discretionary costs for marketing, advertising and expenses were scrutinized and discouraged, while value was placed on being resourceful and self-reliant.

This philosophy, doing more with less, made me appreciate a recent segment on 60 Minutes featuring Malcolm Gladwell, “The Power of the Underdog.” Gladwell is an author, as well as a journalist who writes pieces on those who overcome major obstacles and succeed in forging their own paths.

In the 60 Minutes’ segment, Gladwell, referring to the biblical story David & Goliath, states that people often exaggerate Goliath’s strength and minimize the potential of the underdog. Gladwell asserts that the underdog can prevail by developing resourcefulness and a competitive edge.

Gladwell illustrates further, speaking about software icon and founder and CEO of TIBCO, Vivek Ranadive. Ranadive, who had never touched a basketball in his life, took on the challenge of coaching his daughter’s basketball team. The team was weak and lacking talent. However, they developed a unique strategy based on a “maniacal defense.” This unique and innovative approach was so successful that the team made it to the state finals during their first season. Plus, Ranadive enjoyed basketball so much that he became part owner of the Golden State Warriors.

Another example shared by Gladwell was Gary Cohn, President and COO of Goldman Sachs, who achieved success after overcoming a major impediment – dyslexia. Learning disabilities, such as dyslexia, are common in the executive ranks. Cohn was never expected to graduate high school because of his reading deficiency. Yet, he established a competitive edge by developing an acute sense of listening and being fearless in taking chances.

Gladwell, who also identifies himself as a typical underdog, was brought up in a humble setting with parents who did not believe in watching television, listening to the stereo, or dining out at restaurants. Gladwell was not a gifted academic. He attended a state college, and created a name for himself by challenging the status quo on how things are measured – their market value. One of his largest convictions revolves around the public obsession with Ivy League colleges. Gladwell questions whether a $60,000.00 per year education, at institutions such as Yale, Harvard, etc., equates to six times better an education than that of a state college education.

Gladwell is a self-professed recluse, who works out of the New York Library. He’s a multi-millionaire writer, speaker and business consultant with a strong following, focusing on people who have chosen a different route – the end run. Not bad for an underdog.

We all have shortcomings to overcome. One way to do that is to Identify with and learn from others who have overcome similar challenges.

As we develop into the powerhouses we hope to be, it’s important to understand that those who compete with us do an excellent job of exposing our weaknesses. When plans falter, we have to assess where our premises are off and what part of our strategy needs to change.

Becoming nimble and resourceful is not accomplished overnight – it takes discipline, practice, and perseverance. It’s our willingness to take initiative, to be different, risk exposure for failure, and recognize proper timing to be successful. We can benefit from examining how underdogs work at developing their skills and beating the odds. Courage is a large part of what it takes for an underdog to be successful.

As a manager or entrepreneur, your ability to develop your unique brand is essential for success. In an ever-changing marketplace, it’s essential to have a distinct and clear vision on how to adapt and thrive. Know your strengths and weakness, have the courage to step outside of the norm, be confident, and persevere. In executing your goals, fully leverage your competitive advantages and trust your instincts to overcome your challenges.

Vantage Point is led by Jay Casavant, who founded the firm in 2007 after being in the high tech recruitment business for 22 years.